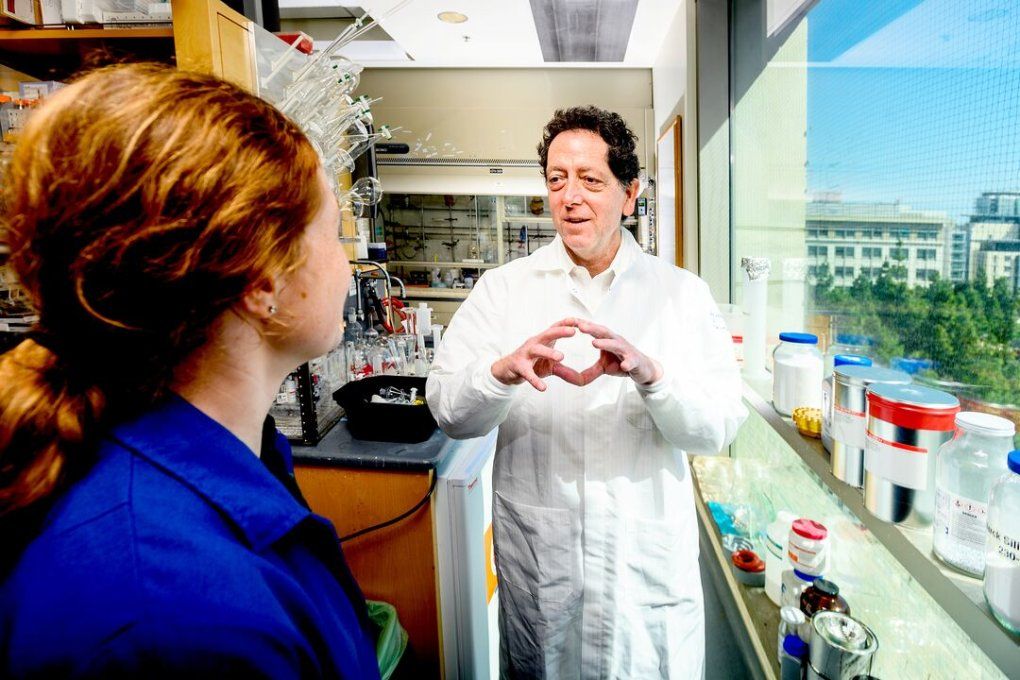 Tumor cells are notoriously good at evading the human immune system; they put up physical walls, wear disguises and handcuff the immune system with molecular tricks. Now, UC San Francisco researchers have developed a drug that overcomes some of these barriers, marking cancer cells for destruction by the immune system.

The new therapy, described in Cancer Cell, pulls a mutated version of the protein KRAS to the surface of cancer cells, where the drug-KRAS complex acts as an “eat me” flag. Then, an immunotherapy can coax the immune system to effectively eliminate all cells bearing this flag.

“The immune system already has the potential to recognize mutated KRAS, but it usually can’t find it very well. When we put this marker on the protein, it becomes much easier for the immune system,” said UCSF chemist and Howard Hughes Medical Institute Investigator Kevan Shokat, PhD, who helped lead the new work.

KRAS mutations are found in about one quarter of all tumors, making them one of the most common gene mutations in cancer. Mutated KRAS is also the target of sotorasib, which the Food and Drug Administration (FDA) has given preliminary approval for use in lung cancer, and the two approaches may eventually work well in combination.

“It’s exciting to have a new strategy leveraging the immune system that we can combine with targeted KRAS drugs,” said Charles Craik, PhD, a lead study author and professor of pharmaceutical chemistry at UCSF. “We suspect that this could lead to deeper and longer responses for cancer patients.”

Turning Cancer Markers Inside Out

The immune system typically recognizes foreign cells because of unusual proteins that jut out of their surfaces. But when it comes to cancer cells, there are few unique proteins found on their outsides. Instead, most proteins that differentiate tumor cells from healthy cells are inside the cells, where the immune system can’t detect them.

For many years, KRAS – despite how common it is in cancers – was considered undruggable. The mutated version of KRAS, which drives the growth of tumor cells, operates inside cells. It often has only one small change that differentiates it from normal KRAS, and doesn’t have a readily visible spot on its structure for a drug to bind. But over recent decades, Shokat carried out detailed analyses of the protein and discovered a hidden pocket in mutated KRAS that a drug could block. His work contributed to the development and approval of sotorasib.

Sotorasib, however, doesn’t help all patients with KRAS mutations, and some of the tumors it does shrink become resistant and start growing again. Shokat, Craik and their colleagues wondered whether there was another way to target KRAS.

In the new work, the team shows that when ARS1620 – a targeted KRAS drug similar to sotorasib – binds to mutated KRAS, it doesn’t just block KRAS from effecting tumor growth. It also coaxes the cell to recognize the ARS1620-KRAS complex as a foreign molecule.

“This mutated protein is usually flying under the radar because it’s so similar to the healthy protein,” says Craik. “But when you attach this drug to it, it gets spotted right away.”

That means the cell processes the protein and moves it to its surface, as a signal to the immune system. The KRAS that was once hidden inside is now displayed as an “eat me” flag on the outside of the tumor cells.

With the shift of mutated KRAS from the inside to the outside of cells, the UCSF team was next able to screen a library of billions of human antibodies to identify those that could now recognize this KRAS flag. The researchers showed with studies on both isolated protein and human cells that the most promising antibody they had identified could bind tightly to the drug ARS1620 as well as the ARS1620-KRAS complex.

When you attach this drug to it, it gets spotted right away.

Then, the group engineered an immunotherapy around that antibody, coaxing the immune system’s T cells to recognize the KRAS flag and target cells for destruction. They found that the new immunotherapy could kill tumor cells that had the mutated KRAS and were treated with ARS1620, including those that had already developed resistance to ARS1620.

“What we’ve shown here is proof of principle that a cell resistant to current drugs can be killed by our strategy,” says Shokat.

More work is needed in animals and humans before the treatment could be used clinically. The researchers say that the new approach could pave the way not only for combination treatments in cancers with KRAS mutations, but also other similar pairings of targeted drugs with immunotherapies.

“This is a platform technology,” says Craik. “We’d like to go after other targets that might also move molecules to the cell surface and make them amenable to immunotherapy.”