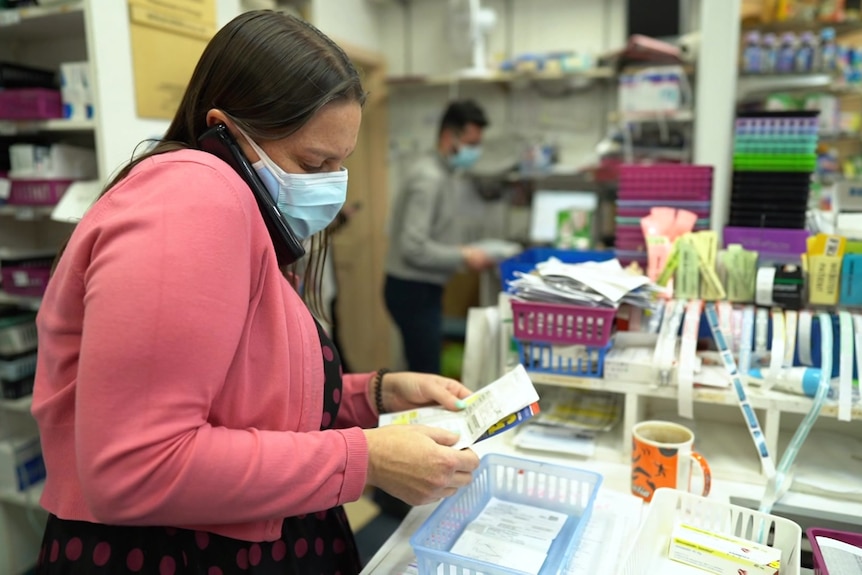 Doctors and pharmacists are warning there could be serious consequences for patients if the shortage of hundreds of medications isn’t addressed soon.

More than 340 medications are currently in short supply, with a further 85 expected to join the list.

Pharmacist Natalie Kopas has been struggling both to fill her shelves with cold and flu tablets and common pain medications and also prescription medication.

“People can visibly see the cold and flu and the pain relief areas being out of stock, but in the dispensary, there’s certainly been a lot of medications for chronic conditions [out of stock],” she told 7.30.

Three years into the pandemic, pharmacies like Natalie Kopas’s have dealt with one stock shortage after another — from toilet paper and tissues to masks and rapid antigen tests — but the current battle to access hundreds of medications their customers need is different.

“A lot of these medications are life-saving. And that’s not an exaggeration or an over-dramatisation,” she said.

“These are medications that people need in order to stay healthy and to stay alive.”

Quality of life impacted by shortages

For Karen Brown, it’s not about a life-saving drug, but one that vastly improves her quality of life.

She has secondary progressive multiple sclerosis — a disease that affects the central nervous system.

She takes two medications to manage her symptoms, but for the last eight weeks, one of them has been impossible to find.

“I take a medication for muscle spasms and I also take Ditropan, which is for an overactive bladder,” she told 7.30.

“And Ditropan is a medication that I can’t get at the moment.”

There is an alternative available, but it’s six times the price and nowhere near as effective.

“You lose confidence going out, because you’re always frightened that you’re going to have an accident,” she said.

Ninety per cent of medication sold in Australia is imported; the vast majority comes from Europe and the United States.

But they, like the rest of the world, are increasingly reliant on China and India for the active ingredients crucial to making them.

That has left Australia dangerously dependent on just a few countries for its supply of medication, and patients like Ashleigh Rae Cooper say the pandemic has shown Australia needs to boost its own manufacturing capacity.

“We need medical manufacturing in Australia, we need that to be returned here and to boost that,” she told 7.30.

“There’s no reason why we couldn’t do it as far as I know. But it would make Australians lives so much easier if we had that.

Ms Cooper has been struggling to access a medication she needs to treat her diabetes, but the shortage in this case has come from an unlikely source.

Earlier this year, the diabetes drug Ozempic blew up on social media with users spruiking its weight loss potential, causing major supply problems for those who needed it, like Ms Cooper.

“I don’t want to begrudge people for wanting to drop a few kilos if they wanted to, or needed to,” she told 7.30.

“But it’s really hurtful when there’s a medical need that can’t be met because somebody else wants to fit into a new pair of jeans. It’s not just hurtful. It’s also, frankly, quite sickening.”

The Therapeutic Goods Administration called on doctors to limit prescribing the drug to people with type two diabetes.

“I think it is really plugging gaps asking pharmacists and GPs and patients to solve the problem by limiting the use or the supply of a drug, when really the solution needs to be coming from much higher up the supply chain.”

Industry bracing for another year of shortages

Last year, the government struck a deal with the pharmaceutical industry that will force them to hold a minimum of four to six months’ supply of critical medicines, but the new rules don’t kick in until next July.

“I think that that is a very good idea, [but] just a little bit disappointing that it’s come this late into the pandemic when medication shortages have been occurring for such a long time,” she told 7.30.

“I think that that’s going to really help us in the future.

“[But] we’ve still got many months between now and then in which we have to continue to manage the shortages.”

She’s worried about the dangers to patients of chopping and changing their prescriptions to respond to regular shortages.

“Having to make constant changes can confuse patients, and we are concerned that will lead to side effects or unwanted outcomes.”

“When there are shortages, it’s not only just about the anxiety that it causes, but it’s about the fact that people need these medications,” she said.

“Having a regular uninterrupted supply of them is one of the most important things in the world for many people.”

In a statement, Health Minister Mark Butler said the government was boosting medical manufacturing and had agreements in place to protect Australians from global shortages.

The TGA said the number of shortages had remained consistent since it began collecting data in 2019, but that it was committed to reducing the impact of shortages on patients.

Next post How to live without chronic back pain, according to an expert | Health